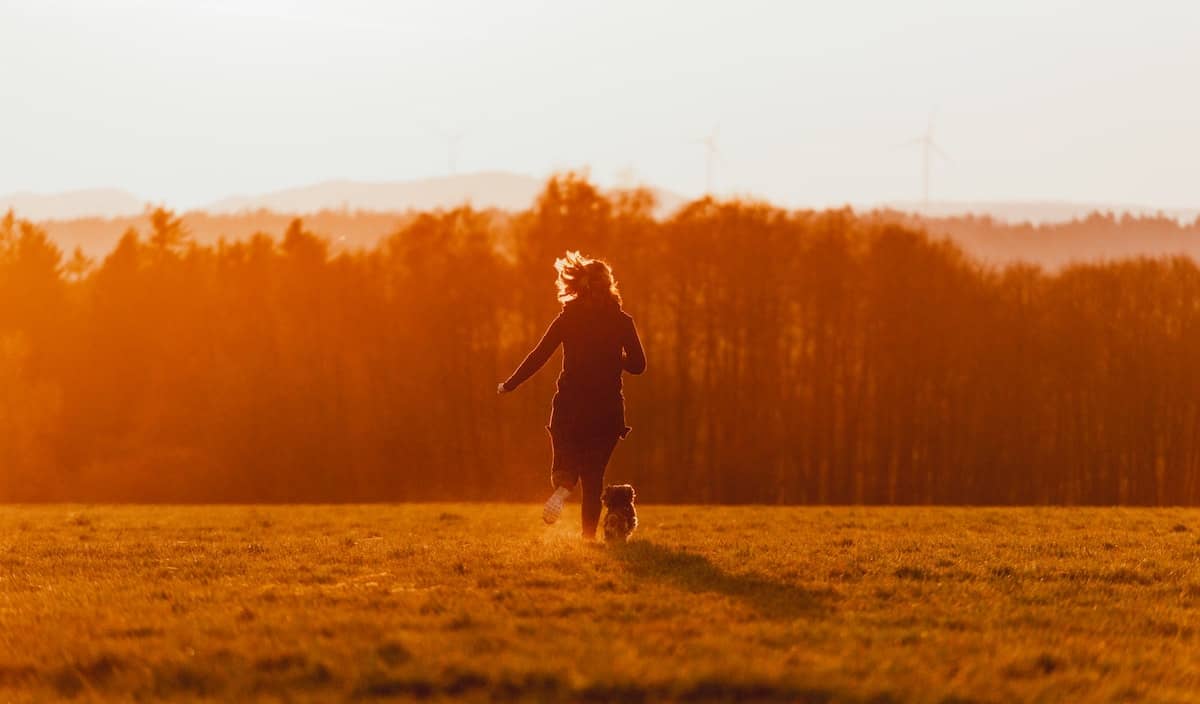 Yes! You read that right a greyhound is almost three times as fast at running as the fastest human that has ever lived. But why are dogs faster than humans? What makes them such good runners?

Dogs are faster than humans because their anatomy makes them better able to run. For example, dogs can run on all fours and use just the tips of their toes, giving them a massive speed advantage. They also have tissue structures that help them run and have faster metabolisms.

In his article, we will look into the factors listed above. Then, I will explain what each means and why dogs run faster than humans.

By the time we are done, you will know why you will likely lose if you race against your dog or any abled-bodied dog – even if you are athletic and fast for a human.

Dogs Run on All Fours, Which Comes With Faster Gaits

Generally speaking, quadrupeds such as dogs are faster runners than bipeds such as humans. However, this is not always the case.

One way to show that quadrupeds (like dogs) are usually faster than bipeds (like humans) is to compare the speed of other bipeds with that of dogs.

The table above shows that an ostrich, a biped, is just about as fast as a greyhound, a quadruped. So far, it seems wrong to assume that humans are slower than dogs because we use two limbs instead of four.

However, ostriches have one card up their sleeves that humans don’t have, aside from being bipeds. They walk and run on their toes instead of their whole feet like us, making them much faster.

We will look into that in detail later in the article. But, for now, we can take another approach. So, let’s ask ourselves – how much faster could humans run if we used all four limbs?

This speed was enough to win the Guinness World Record for fastest quadrupedal locomotion in humans, which hasn’t been broken since. Here’s a YouTube video of that incredible feat:

Nevertheless, scientists have found that quadrupedal locomotion could decrease the time to win a 100-meter (328-foot) race from the current 9.58s to 9.27s. This breakthrough would happen in 2048, assuming the current race-time trends continue.

When running on all fours, humans can gallop. When running at top speed, galloping is the gait used by horses, cheetahs, and greyhounds.

Humans haven’t evolved to run on all fours, which is why it would take us up to 2048 to increase our top speed when using quadrupedal locomotion.

However, dogs are adapted to using all four limbs to gallop, which explains why they are faster than us.

Dogs Use Their Toes Instead of the Whole Foot To Run

Dogs can move this way because their ankles are anatomically where human knees are. So, the “soles of their feet” are akin to calves in humans.

Ostriches mentioned earlier are also digitigrade, which explains why they move much faster than humans despite being bipedal.

Dogs Have a Higher Metabolism

The process by which the food we eat converts into energy is called metabolism. Dogs have a higher metabolism than humans.

Energy is required when performing high-intensity activities such as running. Therefore, the more fuel available, the better we can perform such activities.

For elite athletes to increase their performance, they typically undergo intensive training.

During the training, their metabolic levels rise when accompanied by an appropriate increase in dietary intake, such intensive training results in improved performance.

Though this factor only accounts for a slight difference, dogs run faster because their bodies provide more energy during the activity.

Dogs Have Tissue Structures That Are Better Adapted to Running

When it comes to physical activity, you can divide the muscles of animals into two groups.

However, the limb muscles of the greyhound consist of 80 to 100% fast-twitch muscles.

Judging by tissue structure alone, even the fastest human sprinter can’t outrun a greyhound because he doesn’t have enough fast-twitch fibers.

Final Notes On Why Dogs Are So Fast Compared to Humans

Dogs being faster than humans has everything to do with nature. They have a higher proportion of fast-twitch muscles, use quadrupedal locomotion, have a higher metabolism, and have longer strides because only their toes contact the ground when running.

Quadrupedal locomotion enables dogs to use fast gaits such as the rotary gallop.

If you’ve been under the impression that your dog is faster than you because you are out of shape, you can now rest easy. No matter your condition, your dog will most likely always defeat you in running races.

TheFactualDoggo.com is dedicated to publishing high-quality articles for dog owners and dog lovers.

We write about dog behavior, owners (and owners behavior) and in the future, we will start looking at various dog breeds in detail. Read more here...