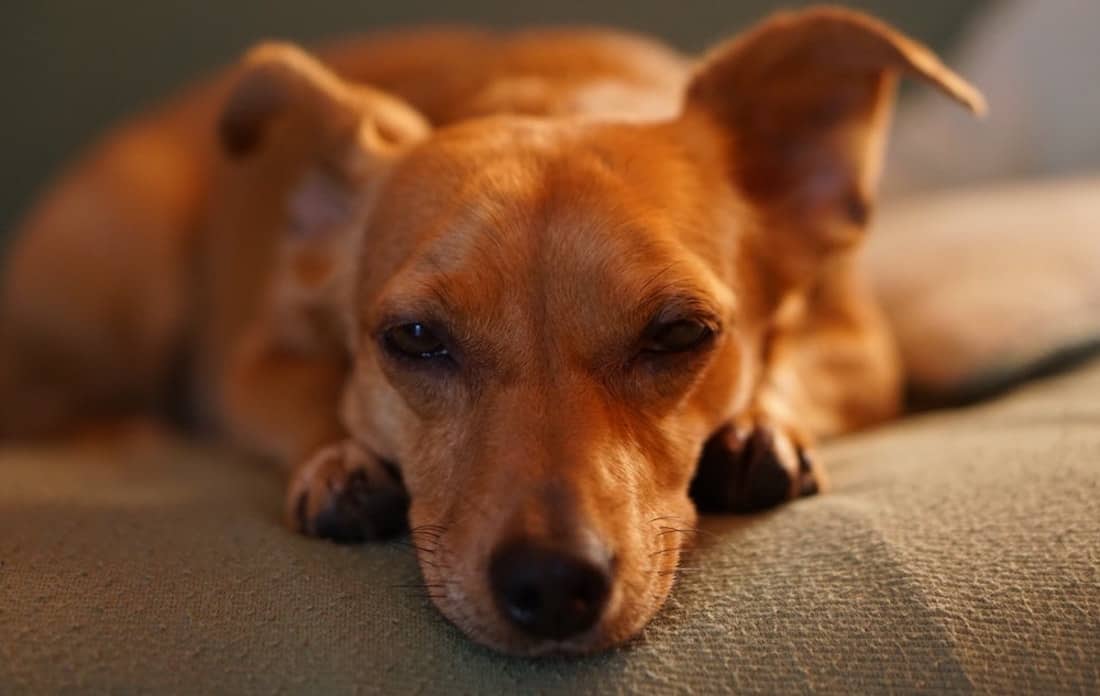 Dogs make fantastic pets. They are funny, cute, cuddly, and loving. They are also fascinating; watching what they get up to is one of the great joys of being a dog owner.

For example, dogs seem to sleep much more than humans but also sleep in shorter bursts than us. So why are dogs light sleepers, and how do canine sleep patterns vary from ours?

Dogs are light sleepers because this allows them to stay alert for sounds that could pose a threat (this stems from their wolf ancestors). As a result, dogs can easily be disturbed when asleep. They also sleep for shorter periods than humans do, so may often wake up during the night.

In this article, we will examine the strange sleeping habits of dogs and why humans and dogs follow different sleep schedules. So you can gain some new insight into how and why your dog sleeps the way they do.

Are Dogs Ever Fully Asleep?

Dogs are polyphasic sleepers, meaning they sleep in intervals throughout the day. However, dogs are most likely to be fully asleep in the middle of the night when it’s dark and quiet.

How Many Hours of Sleep Do Dogs Usually Get at Night?

Dogs don’t sleep in the same way that humans do. Instead, they tend to be more active and hyper during their waking hours but then sleep for short periods throughout the day. But how many hours of sleep does your dog get at night while you’re also sleeping?

It’s important to remember that not all breeds of dogs or even individual dogs will have the same sleeping habits. For example, large dogs, old dogs, and puppies typically enjoy more sleep than smaller breeds or working dogs.

If you are worried that your dog might get either too much or not enough sleep, this video will be helpful:

Do Dogs Prefer To Sleep in the Dark?

If you observe your dog’s daily habits, you’ll notice that they spend a large chunk of the day asleep and relaxing. So it’s clear that dogs can sleep in daylight. This begs the question, do dogs prefer to sleep in the dark?

Dogs prefer to sleep in the dark. They have circadian rhythms like humans, making their sleep sensitive to bright lights and noises. As a result, your dog will get a better night’s sleep in a dark and quiet space, just like a human. But they are very happy napping during daylight hours.

Typically humans get all of their sleep in one long continuous rest, usually at night. However, dogs don’t follow the same sleep patterns.

Dogs will have many periods of sleep during the day and night. Nevertheless, dogs get their best rest and most of their sleep at night as it’s dark and usually quieter.

Why Does My Dog Touch Me When Sleeping?

Your dog touches you when they’re sleeping as it provides them with a sense of security. Dogs are social animals and feel safest and happiest when there are close to other members of their pack.

Dogs are protective and territorial animals. As a result, it’s in your dog’s nature to be ready to bark or investigate any sounds or potential threats.

That’s why dogs are light sleepers, but it also explains why your dog wants to touch you when sleeping. If you wake up, they want to wake up, and vice versa.

Why Does My Dog Sprawl Out While Sleeping?

Dogs sprawl out while sleeping because it is comfortable. They do so because they like it. It is also a sign that they feel safe and secure enough to sleep in this way. They are more likely to curl up in a tight little ball if they feel less safe.

Dogs are light sleepers as they’re polyphasic sleepers, which means they sleep in intervals. When sleeping in intervals, dogs spend less time in deep sleep, meaning they can respond to unfamiliar sounds and smells.

This is a trait they inherited from their wolf ancestors when it was useful to sleep lightly to stay alive.

TheFactualDoggo.com is dedicated to publishing high-quality articles for dog owners and dog lovers.

We write about dog behavior, owners (and owners behavior) and in the future, we will start looking at various dog breeds in detail. Read more here...